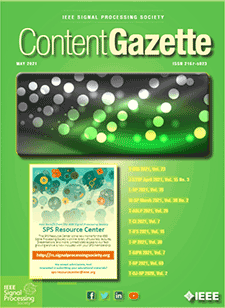 Nominations should be submitted to Theresa Argiropoulos (t.argiropoulos@ieee.org), who will collect the nominations on behalf of Jose' M. F. Moura, Awards Board Chair. The award nominations will be vetted by the Awards Board. Prospective nominators are encouraged to submit nominations well in advance of the deadline of 1 September 2015. Detailed information and nomination/endorsement forms for SPS awards can be found online.

Over the past few years, the Society approved some procedural changes to the SPS Awards program, including some new changes approved earlier this year. Please note that these changes are in effect for the 2015 nomination period. The changes are intended to provide an effective means to encourage award nominations in all categories from the Signal Processing Society community-at-large, including individuals, technical committees, editorial boards and other major Boards, except in the cases of conflict of interests. Technical committees and boards may pass on to the Awards Board one or multiple nominations that they receive for all awards.

The paper awards nomination form now requests citation impact information. The Awards Board will continue to review the nominations and make selections on paper awards.

For all major awards other than paper awards, the Awards Board will now be responsible for vetting the nominations and producing a short list of no more than three nominations per award. The Board of Governors will continue to vote on the selection of the major awards.

Individual nominations can have multiple co-nominators listed on the nomination form. In addition, individual nominations can include up to two endorsements to strengthen the nomination. All endorsements must be submitted via email to the specified address, which will provide the nomination with a date and time stamp. If more than two endorsements are submitted, only the first two received endorsements will be forwarded to the IEEE Signal Processing Society Awards Board for consideration. A nominator cannot serve as an endorser for a nomination he/she is submitting. If the Society policies state that a particular Board/Committee/Individual is not eligible to nominate for a particular award, then that same group of individuals is not eligible to be an endorser.

For full details on each award, as well as the new Society and Technical Committee/Special Interest Group awards policies and endorsement form, please visit the Society’s website at http://www.signalprocessingsociety.org/awards-fellows/awardspage/.

If you have any questions regarding the process, please do not hesitate to contact Jose' M. F. Moura, Awards Board Chair at moura@ece.cmu.edu.