The IEEE Signal Processing Society would like to express our concern and support for the members of our global community and all affected by the current COVID-19 pandemic. We appreciate your continued patience and support as we work together to navigate these unforeseen and uncertain circumstances. We hope that you, your families, and your communities are safe!

The potentials of using millimeter-wave (mmWave) frequency for future wireless cellular communication systems have motivated the study of large-scale antenna arrays for achieving highly directional beamforming. However, the conventional fully digital beamforming methods, which require one radio frequency (RF) chain per antenna element, are not viable for large-scale antenna arrays due to the high cost and high power consumption of RF chain components in high frequencies.

To address this hardware limitation challenge, this webinar will introduce a hybrid digital-analog beamforming architecture in which the overall beamformer consists of a low-dimensional digital beamformer followed by an RF beamformer implemented using analog phase shifters.

The aim is to show that such an architecture can approach the performance of a fully digital scheme with a much fewer number of RF chains. Specifically, the presenter established that if the number of RF chains is twice the total number of data streams, the hybrid beamforming structure can realize any fully digital beamformer exactly, regardless of the number of antenna elements. For cases with the fewer number of RF chains, he further consider the hybrid beamforming design problem for both the transmission scenario of a point-to-point multiple-input multiple-output (MIMO) system and a downlink multiuser multiple-input single-output (MU-MISO) system. For each scenario, he proposes a heuristic hybrid beamforming design that achieves a performance close to the performance of the fully digital beamforming baseline. The proposed algorithms are further modified for the more practical setting in which only finite resolution phase shifters are available. Numerical simulations show that the proposed schemes are effective even when phase shifters with very low resolution are used. 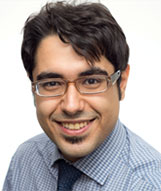 Since 2018, he has been a Post-Doctoral Fellow with the University of Toronto. In 2015, he was a Research Intern with Bell Labs, Alcatel Lucent, Stuttgart, Germany. His research interests include MIMO communications, optimization theory, wireless communications, signal processing, and machine learning.

Dr. Foad Sohabi was a recipient of the IEEE Signal Processing Society Best Paper Award in 2017.