With the increasing growth of urbanization, it introduces traffic jams and congestion in several locations around the city. Apart from accidents, that may result in drastic average travel time increase from point A to point B in a city. Especially junctions are critical since delays and accidents tend to be concentrated at these places. Under these circumstances, intelligent traffic systems are unavoidable that are capable of tasks such as vehicle detection, tracking, violation detection and congestion control.

The 2020 VIP-cup challenge focuses on fisheye cameras mounted into street lamps at junctions and vehicle detection and tracking to be used for a junction management system to optimize the flow of traffic and synchronize with other junctions to obtain bottleneck performances throughout the city. Fisheye cameras are used since they tend to be promising in terms of reliability and scene coverage at a chosen junction. They provide 360 degrees of observation view, thus introducing key changes in traffic management.

Although fish eye cameras have a key role in junction management systems, accompanying challenges come with them as well, such as : High distortion ratios, Different scales of same target object moving in different parts of the image, Day/night views variance (night view suffers from low quality related to surrounding lightning conditions), Exposure introduced with vehicle lights (night view). A dataset of traffic videos from several junctions at different times during the day/night is provided with the annotation for training and validation (icip2020.issd.com.tr). The evaluation will be performed based on separate test datasets. 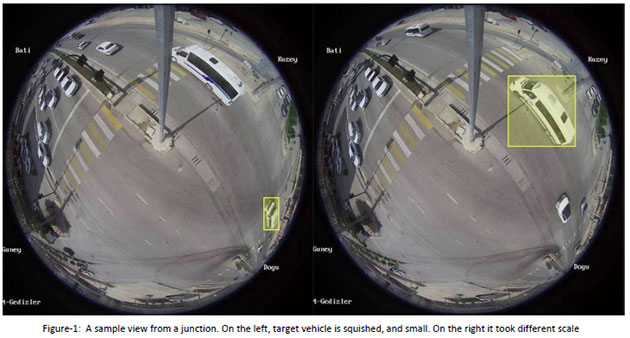 Each team must be composed of:

Tasks to Execute and Expected Outcomes

Dataset is labeled in a standard COCO format. You may parse it the way you like.