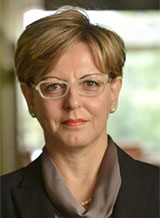 Q. “Why did you become Distinguished Professor at Rutgers University?”

As Editor-in-Chief (EIC) of the IEEE Transactions on Signal Processing, I really enjoyed the interaction with the editorial board and the SPS publications board. Through this experience, I realized the power of developing a shared vision and getting people to support it. During my EIC term, we were able to improve the journal in terms of quality and timeliness - an improvement that was reflected in a significant jump in the journal ranking. Encouraged by my EIC experience, I decided to experiment with academic leadership, which is how I ended up as chair of the ECE Department at Rutgers. Although faculty often refer to this move as “crossing over to the dark side,” my chair experience was immensely enjoyable and rewarding. During my 2 chair terms, we hired amazing people, improved diversity, substantially expanded student enrollment both at the graduate and undergraduate level, and made ECE by far the largest department in the Rutgers School of Engineering. We cultivated a culture of achievement. This galvanized faculty and students for pursuing excellence, which was reflected in an unprecedented number of awards for faculty and students. I was thrilled that our program climbed from #51 in 2010 to #36 in the 2016 US News & World Report rankings.

I kept my research while I was chair. One year after stepping down I was promoted to Distinguished Professor. At Rutgers, this promotion is based solely on one’s scholarship and research contributions.

The work of an academic is multifaceted. Over the years, my group has done research on blind system identification, which has applications to many areas, including wireless communications, ultrasound imaging, and seismic site response analysis. We have also proposed important theoretical results on cooperative beamforming approaches, where cooperating nodes acting as a distributed antenna help the source transmit to its destination. In a highly cited piece of work, we have shown that the use of cooperative relays is an effective means of improving the security of wireless communications against eavesdroppers at the physical layer. More recently, we have proposed new radar concepts that use multiple antennas and sparse sensing to achieve high target resolution while requiring reduced amounts of data and reduced hardware cost. Both aforementioned features are highly desirable in radar for autonomous vehicles. We have also proposed methods for effective spectrum sharing between radar and communication systems by designing signaling schemes that control interference. This work will have an important impact when spectrum - which was previously earmarked for radar -  is made available to both radar and communication systems. Regulatory bodies in the US are pushing for such change in order to accommodate the ever-increasing bandwidth needs of wireless applications.

Equally important to research, I view the contribution of an academic to human development.  As faculty, I work on training future engineers to think critically and be able to address open-ended problems. I also train Ph.D. students, who by the time they graduate have pushed the envelope of their research topic, and have become confident, independent thinkers, ready to contribute to the advancement of their fields in significant ways. I am very proud of the Ph.D. students I have produced over the years.

By getting involved in professional service, I work on creating an enabling structure that best serves researchers, and allows for the effective flow of knowledge across disciplinary boundaries. I have pursued several initiatives on increasing the number of women and underrepresented minorities in the field of electrical engineering in general and signal processing in particular. It is a priority for me to provide mentoring and promote fair access to available professional opportunities for those who have already chosen those fields.

Q. “What challenges did you face to get to where you are today?”

I was born in Greece and came to the US with the intention of returning to Greece upon the completion of masters. However, during graduate school, I became involved in research, which changed my perspective and led me to pursue an academic career in the US. It was a difficult decision to leave a big family behind; that was a pre-skype and pre-social media era, where landline phone calls and surface mail were the only means of communication. Raising kids and trying to give my best to both family and work was also a challenge. Thankfully, I have an amazing husband who has always been a great source of support and constant encouragement for me.

There was also a challenge that I have not shared with many up to now, and which had to do with my first academic position at a school whose name I will not disclose.  Upon showing up to start my tenure-track assistant professor job, I was informed that my visa paperwork had not been processed in time, hence my contract was void. They offered no sympathy, except that they would process a new contract starting the following semester. They also stated that what I would do in-between was none of their concern and for me to navigate alone. Not a particularly welcoming attitude, right? I still wonder whether the deferred start date might have had something to do with my pretty advanced stage of pregnancy at the time… I decided that it was not the environment for me to launch my career and left. I returned to my Ph.D. institution, where I was offered a visiting faculty appointment, finished writing a book with my Ph.D. thesis advisory, gave birth to my first child, and launched a new round of job applications. The following year I had a new job, at Drexel University, my home of 18 very happy and productive years. I have always been a big believer that every obstacle is an opportunity for something better.

Signal processing is a fascinating field. It is the brain of most technologies that have changed the course of history, and the basis of tools that are revolutionizing our understanding of the world, such as, data modeling, data analytics, machine learning. Scientists and engineers in signal processing should take every opportunity to highlight the role of SP as the key enabler or interdisciplinary research, and widen the pool of talent interested in SP.  They should also strive to create a welcoming environment for women and other groups that have traditionally experienced bias or have avoided our field. The plurality of perspectives introduces fresh ways to address problems and move research and technology forward. As President-Elect of the IEEE Signal Processing Society – my appointment is starting in January 2020 -  raising the visibility of signal processing and promoting diversity and inclusion will be at the top of my agenda.