The First in Series to Highlight Women in Signal Processing: Rabab Ward

Home » The First in Series to Highlight Women in Signal Processing: Rabab Ward

The First in Series to Highlight Women in Signal Processing: Rabab Ward 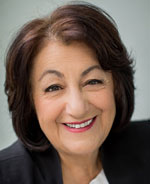 Rabab Ward's career includes many firsts, particularly for women in engineering and signal processing, paving the way in three continents and spanning over four decades. This did not come as easy as we discovered.  After many years of perseverance, Ward became the first woman with a Ph.D. to be appointed as professor of electrical engineering in Canada in 1981. Since then, her work has been recognized by a long list of awards, research prizes and honors. As the 2016-2017 President of the IEEE Signal Processing Society, she provided exemplary leadership and dedication. While head of UBC’s innovative Institute for Computing, Information and Cognitive Systems, she raised the funds for a new building for the Institute, and the Institute grew from 58 researchers to 160 academics. When she began her engineering career 45 years ago, she could not have imagined that curiosity and a love of math would lead to international recognition of her groundbreaking work in digital signal processing.

Q. ”You have a long list of awards and achievements. What do you consider is your most important achievement?”

There was little hesitation in her reply: “ it’s the Ph.D. and Master students I have graduated because they are doing a lot of good work and making significant contributions to society. In 2013, I was recognized by my university, UBC, a university with over 3300 full-time faculty members, by its highest mentoring award for excellence in training and mentoring. This award is the dearest to my heart.”

Q.“ How did you get to study engineering? ”

“ Early on I was told that as a woman, there was no point in studying engineering. This was surprising to me because Lebanon - where I was born and went to school- was known for its socially progressive society and having some of the top universities in the Middle East. After graduating from high school, in 1962, with the highest marks in Lebanon, I applied to study engineering at the American University of Beirut. However, I was refused admission there because I was a woman. Determined to study engineering, I confronted the dean of engineering (an American) and asked him why young men with inferior grades were being admitted to the program, while I was refused.  He told me there were two reasons. The first was that every engineering student had to attend a summer camp in the Bekaa valley and the camp had no toilets for women. The second reason was that I will cost them a lot of money to train, but as a woman, I will get married, and they will not get their investment back.

My father was not unhappy to learn this because he believed that medicine was a more suitable profession for women than engineering.  Torn between studying medicine to please my father and engineering which was my first choice, I decided to go to Egypt, where I could study either. There were many women studying engineering in Egypt. After the first week in medical school, I decided it really wasn’t for me. I wrote a letter to my father, a very emotional one. He told me that he only wanted the best for me but I am free to do what I want. I transferred to engineering, and I’ve never regretted it”

After 5 years at the University of Cairo in Egypt, I worked for one year as an electrical transmission engineer at the Ministry of Hydro-Electric Resources in Lebanon.  But I had already decided that my future lay in academia. I applied and won a full scholarship from the Lebanese government to do a Ph.D. in engineering at the University of California, Berkeley.  Upon arrival at Berkeley in 1967, I was shocked about the scarcity of women students in engineering. So I became the second woman to get a Ph.D. in Electrical Engineering from this university. The first woman was Egyptian.

Q. “ In 1981, you were the first woman appointed as professor of engineering in Canada and in British Columbia. How difficult was this to achieve then? “

In 1972, my new husband Peter and I finished our Ph.D. (his in civil engineering). Those were difficult times to get academic jobs but graduates from Berkeley could find work in their fields because of Berkeley’s excellent reputation. In my case, I was not lucky.  My husband was offered a professor job at the University of British Columbia in Vancouver, and we moved to Canada. After 18 months, I had a sessional lecturer job at UBC, which was renewed every semester, teaching whatever courses they had no one to teach. This was the first time that I felt women were discriminated against. It was in North America, not in Lebanon.

Since there were no good academic jobs, I took the opportunity to raise a family.  My professional break came in 1975 when the University of Rhodesia (now Zimbabwe) hired my husband and me for its new engineering faculty- Peter in Civil Engineering and me in Electrical Engineering. In my department at the beginning, we were a total of four faculty members, including the head of the dept. developing a new department in electrical engineering. This was something much ahead of my experience but very exciting and rewarding. At first, it was idyllic, however, civil war and factional fighting began to grip the country and when the head of my department was bayonetted on our doorsteps, it was time to go. In 1979, we came back to Vancouver and I became sessional lecturer again.  After 2 years, my colleagues at UBC decided that I deserved better. They created a position for me as an assistant professor, with tenure track. This was 9 years since I obtained my Ph.D. and during which I taught courses and labs in almost all subjects in electrical engineering. But still I reached my goal and I was ecstatic.

Q. “How did you get to work in signal processing?”

In a fast-moving field such as in electrical and computer engineering my work in my Ph.D. research however was outdated and I had to decide what research I wanted to pursue. Also for the first few years as a professor, I was (again) given a heavy teaching load in various areas in electrical engineering. However, these turned out to be a silver lining, as teaching a subject makes one understands it in more depth. This is when I selected to study digital signal processing, which was then a new subject and specialized in Image processing. This turned out to be an extremely wise decision. It was then the start of a decade defined by the rise of computers and exciting new digital technologies. Signal processing has proven to be a key factor in the digital revolution. It is a field of basic fundamentals that are applicable to countless problems affecting every aspect of our every digital day lives. These range from the mobile phone, multimedia devices to finance, smart grids, smart cities, to scientific apparatus, medical instruments, smart hearing and numerous other health care devices and so on.

Q. “ What advice would you give to scientist/engineers in signal processing”

Spread the word about the power of signal processing and be proud that you specialize in this field. Signal Processing is at the heart of modern technological advances and fundamental scientific discoveries. Processing physical signals that arise in nature, or analyzing data from sensors and devices is what science and useful engineering products are based on.  However, relying on data alone to extract information will not always work and will miss many important applications. We need an in-depth understanding and analysis of what is going on in the system that has generated this data. This is where signal processing is invaluable.