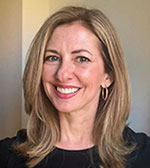 Dr. Scaglione’s expertise is in the broad area of statistical signal processing for communication, electric power systems and information and social networks. Her current research focuses on studying and enabling decentralized learning and signal processing in networked systems.

I was born in Reggio Calabria (Italy looks like a boot, and my town is its “toe”). Reggio is in front of the water, with perfectly tempered weather, offers a beautiful view of the Etna Volcano, peaking beyond the zephyr blue sea in the strait of Messina, and beach life that can be enjoyed for three straight months a year. Enough to forget social problems often profiled in classic American movies.  In this backdrop, nine out of twelve months a year I was a quiet and studious kid, with a rebellious side that manifested itself with a spikey hair cut and with my habit for drawing cartoons.

After high school, I moved to Rome, where my brother was studying law and I started engineering. I chose it because I was intrigued by the notion of artificial intelligence, because it was hard, and because I thought it combined exact math (which I felt was full of beauty) with design, where my creative mind could find an outlet. But I was deeply confused about what kind of engineer I was (I come from a family of lawyers). I chose to become an electrical engineer rather than a computer scientist because the first course of programming was boring compared to the math courses I had to take to become an electrical engineer.  Soon after I fell in love with signal processing because of Papoulis book and Oppenheim and Shafer book and the professor who taught me about random processes, who later became my Ph.D. advisor (but automatic control was a close contender!). I had no plans of pursuing a doctorate. I came to it once I realized that my desire for doing creative work could not be met by the job opportunities I had in Italy with a Master degree. So, when my advisor (Prof. Sergio Barbarossa) asked me after my Master thesis if a Ph.D. would interest me I basically said: “where do I sign?”.  And that is how my research career in Signal Processing started.  I visited Prof. Georgios Giannakis group when I was a Ph.D. student and that lead to really nice research, my SPS best paper award, and my appointment as a Postdoc in his group at the University of Minnesota. I later realized that I might have been the only Postdoc in the entire US who was in the area of Signal Processing for Communications at the time. This was 1999, the heyday of the Tech bubble and job opportunities for me abounded in industry and academia. My heart was set on going back to Italy. That was the plan until I fell in love with my present husband and a friend of mine, Dr. Ananthram Swami, gave me the best life advice I ever received: “Anna, it is best to look for a (permanent) job when you have a (permanent) job”. That is particularly true for academic jobs, I took his advice and looked for jobs in the US, and was able, in spite of my delays and indecisions, to land my first position at the University of New Mexico, in 2000, where my academic career was launched.

Q. “Why did you become full Professor at ASU?”

I had wonderful colleagues at the University of New Mexico, but an opportunity opened up at Cornell, just one year after I joined UNM. The offer was too good to pass, in spite of all the warmth of my colleagues and the beauty of New Mexico. In one year, I left and became an Assistant Professor at Cornell and was tenure there in 2006. But the love of my life was still in Minneapolis. My later move to UC Davis allowed me to solve my “two-body problem” – my husband was a Professor at the University of Minnesota and we were both hired at UC Davis in 2008. Then, in 2015, the move from UC Davis to ASU helped me grow my research group in energy delivery systems, an area where sensing, communications, and decision systems can make a huge difference in having resilient and sustainable infrastructures.

As academics our contributions are twofold: we establish what are the principles superior technologies obey and we train world-class thinkers. When I wrote my Ph.D. thesis, MIMO precoding for wireless communications had a lot of detractors. The same technologies these days are the golden standard. In the short-term society picks winners and losers accounting for many other factors, but longer terms the best technical solutions usually emerge. Timing when that happens is hard. Unless you start a company, and you start it when the time is ripe, the best impact you can hope for is that eventually, you contribute, hopefully, earlier than others, to the chorus of researchers that lead the way towards a better way of doing things. The second contributions scholars from academia make is molding new minds to think critically and create new technology. Your pupils go out into the world and can shake things up too. Right now, I feel society needs to harness data and information technology to share limited resources over congestible networks efficiently, bypassing central control. This is what I am working on now.

Every huge change, particularly if you are uprooted from places and habits, require adaptation, which can cause stress and fear. I have faced a lot of changes in my life when I moved from Italy to the US, and in all my career moves, when I decided to learn in-depth another area beyond signal processing and communications, to best understand how they can be useful in energy infrastructures. Accepting and adapting to change requires courage. But I think courage and imagination are similar virtues (or the latter can replace the former). I certainly feel my imagination is what sustained me and made less afraid of uncertainty because I can envision what is the “sample space” of the outcomes of my possible decisions and I am curious and can see a high reward in taking high risk. Oh, and working like crazy offsets a lot of risks! And I have done that too.

A boring suggestion is to cultivate basic knowledge, before following trends and also to not be afraid to look beyond the problems everyone is looking at. It is fun and thrilling to define your own problems. The area of signal processing has a long tradition in modeling and mapping seemingly impossible problems in some algebraic and statistical formulation that can be beaten to death.  We started from “Acoustic signals” and, while that part certainly continues to be important, the tools from signal processing are so much more widely applied.

Q. “Anything else that you would like to add?”

To my young colleagues: be brave and sensible. These two are not opposing traits.  If you seek to be popular: communicate less your insecurities, be polite but set your boundaries and before you try to rescue the world on your spare time, make sure you take care of yourself, your associates and your tasks. Recognize quickly when help is not going to come your way and do not mull over regrets or spend time arguing. No matter what is your origin, race or gender, accept your weakness and vulnerabilities quietly, be honest and put in front of the world your courage, compassion, and creativity. In short, put your best step forward. These are the best things you can do to be successful.