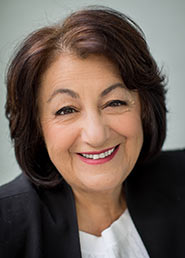 Prof. Rabab Ward's career includes many firsts, particularly for women in engineering and signal processing, paving the way in three continents and spanning over four decades.  This did not come easy as we discovered.  After many years of perseverance, Ward became the first woman with a Ph.D. to be appointed as professor of electrical engineering in Canada in 1981. Since then her work has been recognized by a long list of awards, research prizes and honors. As the 2016-2017 President of the IEEE Signal Processing Society, she provided exemplary leadership and dedication. While head of UBC’s innovative Institute for Computing, Information and Cognitive Systems, she raised the funds for a new building for the Institute, and the Institute grew from 58 researchers to 160 academics.  When she began her engineering career 45 years ago, she could not have imagined that curiosity and a love of math would lead to international recognition of her groundbreaking work in digital signal processing.

We approached Prof. Rabab Ward with a few questions, to learn more!

1. What have been the most important factors in your career path?

An important factor in a career in signal processing is the fast rate of change of this field. The signal processing field keeps changing and evolving at a fast rate. New technical directions, theories and technologies are continually being introduced. This is not the case in all STEM and other fields where the change is not this fast, e.g., psychology, zoology, physics, hydraulics, metallurgy, mining etc. Therefore, an important factor for success in our field is having the drive and enthusiasm to continuously learn and upgrade one’s knowledge and expertise. Besides reading the literature, attending lectures given by experts, and going to SPS conferences help a lot in keeping the desire to learn kindled. I have also been fortunate to have many graduate students whom I exchanged ideas with, learnt a lot from them (and they learnt from me).

Another factor affecting one’s career is dealing with job and family commitments. My work has been of extreme importance to me but this was not at the expense of my family and other important things in my life. It is important to have a work-family balance. This balance was not always even for me. When my children were young, the balance tipped heavily in their favour. They came first and I made sure I had enough time for them and their well-being. However as they became more independent, the progress I made in my career increased.

May be the most important factor in my career, was to obtain the job I wanted. After obtaining my Ph.D., I was not able to get a professorial job, which is what I wanted and aimed at. I persevered and tried hard to keep updating my knowledge. Nine years later I eventually reached that goal and was appointed on a tenure track position (in 1981).  At that time, I was the first and only woman appointed as professor in any engineering field in British Columbia. It was hard then for women in STEM fields to get professorial jobs, especially in engineering. Women in STEM were appointed as sessional lecturers, i.e. semester by semester, to teach courses for which they had no instructor in that semester.

2. What were the main theoretical changes in your field during the last 25-30 years or more?

Besides the Fourier Transform and its variants, Bayesian and statistical based techniques and Markov based methods were also explored and used. In the eighties, neural networks (NNs) were proposed, mainly for problems for which the inside causal behaviour of the system (the transfer function) is not known; but interest in NNs was short lived and declined a lot by the end of that decade.  In the nineties, signal processors started examining and applying wavelets for processing, analyzing and storing digital information. Around 2005, compressive sensing was introduced as a new type of sampling that offers good reduction in data sensing, transmission, and storage. This was followed few years later by the introduction of sparse dictionary learning theory for compressive sensing and signal recovery. Other important theories and technologies (e.g.,  quantization theory, principal component analysis, distributed sensors, processing distributed information over networks etc.) were also developed and used by SP researchers.

Soon after 2010, we started witnessing a big paradigm shift from the traditional model based approaches to data driven solutions. This was due to the revival of neural networks to what became known as deep learning. This new life for NNs was enabled by the great improvements in the cost and computational power of computers, as well as a massive increase in the amount of available data (especially in speech by 2010). There is now a strong interest in this field, as it is a major pillar of modern artificial intelligence.

3. What are few of the main technological and practical issues that have been addressed since the beginning of your career?

There has been a vast progress made by SP and its applications to various different fields.  SP is now present in almost all electronics and communication devices and medical instruments. I will mention only few advances here. The first is a result of the tremendous advances in the areas of audio, speech and later in language processing. Notable amongst them are the advances in hearing aids (that have helped many people I personally know) and the new development of smart hearing aids. Similar impressive progress applies to image processing and multimedia. Here let me point to image and video compression which are now used by almost everyone worldwide.

Compression has allowed images and videos to be transmitted and received in real time and without loss in picture or audio quality. This was impossible 30 years ago; even the idea was somehow implausible. I remember the following from the eighties. We were then able to display pictures on a good quality monochrome display in our lab, but we were not able to obtain a good quality print of the image displaced. To publish our work, the prints were needed by the publisher. To obtain these prints, we took photos of the picture on the display using high quality camera, then we took the film roll to a camera shop to process them and then we sent the prints by hard mail to the publisher.

An extremely technological and practical issue that affected engineers and others and have been now been addressed is computing. There have been great advances in computing machines and computing software. Mainframes computers which lived in specialized compeer centers were replaced by personal desktops and laptop computers and later mobile phones. Computer languages have also evolved tremendously from machine language and Fortran to C and Python and others. Early on in my career, using and obtaining computer results of our codes was not easy. We wrote the programs in FORTRAN or machine language. We typed the code using a punching card machine and carried the box of punched cards to the computer center. There, the computer operator fed them into the computer. There was usually a waiting time of hew hours to receive back the results (which were printed on paper). This process was repeated few times until the program was totally debugged. So we used to spend a lot of time walking to and from the computing center building, which at least was healthy!

4.  In your opinion, what are some of the most exciting areas of research for students and upcoming researchers?

Signal processing has offered good solutions to problems in several fields but there are still many problems looking for good solutions. The most pressing problem the world is facing now is climate change. Climate change is causing catastrophic consequences, resulting e.g., in flooding and forest fires around the world. Monitoring forests by distributed sensors and imaging that can smell or detect unusual smoke will help here to mitigate few of climate change effects. Other areas where much research is still needed are in processing social signals and in improving the health and the quality of life especially for older people as the population is aging fast in many of parts of the world.  SP and AI can provide technology for health monitoring, digital personal assistants and robots that can adapt to the specific needs of a person, even to the emotional and social and not only the physical needs.

On the theory side, besides social signal processing, future research waves may lie in topological signal processing or quantum signal processing. Deep learning is now the hot topic and it will continue to attract the attention of researchers for more years. In this field, there remains much important work, and many are related to the theory. For example, there is a  real need to address challenges such as interpretability, learning without supervision, learning using less data, noisy data or data which might be outside the training distribution or domain-knowledge.  Deep learning is showing promising results in medical applications, but there remains a need to develop efficient and robust deep learning approaches for real-world biomedical problems.

5. If there is one take home message you want the readers of this interview to have, what would it be?

I wish to direct my reply to our younger readers who are starting to build their careers. Success means different things to different people. To be successful, you have to know what you want and find your own path to reach your goals, directed by what you think will be right for you at the different stages of your life. Irrespective of what your goal is, the two important factors to reach success are hard work and perseverance. Hard work in our fields means to keep learning and growing one’s knowledge and expertise. Perseverance means to keep trying, believing in yourself, and not get discouraged by failures.