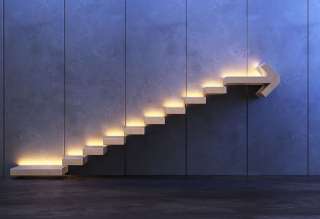 Contributed by Dr. Samet Akcay based on the IEEEXplore® article "Using Deep Convolutional Neural Network Architectures for Object Classification and Detection Within X-Ray Baggage Security Imagery," IEEE Transactions on Information Forensics and Security, 2018 and the SPS webinar of the same title, February 2022, available in the SPS Resource Center. 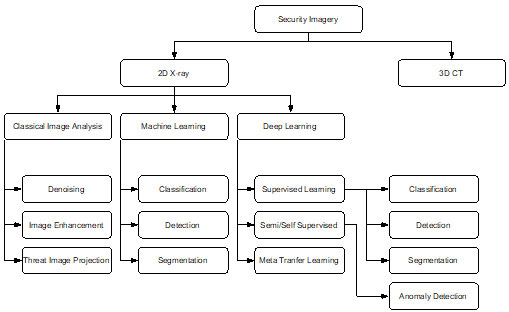 Figure 1. A taxonomy of the X-ray security imaging approaches.

First part of the taxonomy is the classification image analysis, steps of which are as follows: the preprocessing stage improves the quality of the input image; the segmentation stage extracts the region of interest (RoI) from the entire image; the feature extraction stage computes essential characteristics of the object such as edges, texture, and shape; and the classification stage predicts the class label based on the extracted features.

Preprocessing the data is an essential part of making images easier for both humans and computers to read. A common method in the literature is to combine low and high energy X-ray images and subtract the background to reduce noise, then choose a threshold manually [1] or automatically [2]. Pseudo-coloring [3] is another way to improve X-ray images. As shown in Figure 2, it adds color to grey-scale images, which makes it easier to find objects and makes the operators more aware.

This section discusses machine learning in X-ray security imaging with a focus on classification, detection, and segmentation tasks.

Prior to the rise of deep learning, the bag of visual words (BoVW) technique was rather common. As illustrated in Figure 3, a popular strategy is to initially extract features using detectors/descriptors, cluster the features using k-means, and finally classify using Random Forest (RF), Support Vector Machine (SVM), or sparse-representations. 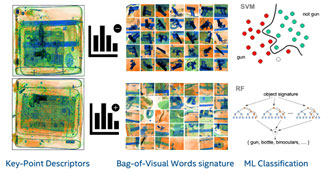 Figure 3. Bag of Visual words (BoW) approach where the features are collected from positive and negative samples via descriptor and detectors, followed by a classifier such as SVM or RF.

These algorithms are, however, evaluated on relatively small datasets, restricting real-time scalability.

This section explores how deep learning algorithms are used in X-ray security. As shown in Figure 1, we divide the algorithms into supervised (classification, detection, and segmentation), unsupervised (anomaly detection) and meta-learning approaches.

In 2016, Akcay et al. [6] conducted one of the first studies to use CNN to classify X-ray security images. The authors investigated how CNN can be used with transfer learning to see how well it helps classify X-ray objects in this problem domain, where the availability of the datasets are limited (See Figure 4). Freezing AlexNet weights layer by layer on a two-class ("gun vs. no-gun") X-ray classification problem shows that CNN performs much better than the classical BoW approach (SIFT+SURF), trained with SVM or RF, even when all of the network's layers are frozen. In another set of tests, CNN is used to solve a hard problem that involves six different classes. The results show that CNN could be very useful in the field.

Figure 4. Transfer-learning approach used in [6] and [7], where an ImageNet pretrained model is fine-tuned on an Xray dataset for the classification problem.

As shown in the preceding section, CNN has demonstrated success in classification. Nevertheless, the cluttered nature of X-ray datasets restricts the application of classification methods in this domain. To this end, the work of [7] investigated object detection techniques. The authors train sliding-window CNN, Faster RCNN, and R-FCN and YOLO models using the DBF2/6 dataset for firearm and multi-class detection problems. Experiments show that Faster RCNN [8] with VGG16 [9] reach 88.3% mAP on the 6-class DBF6 dataset, whereas R-FCN with ResNet-101 obtains the maximum performance 96.3 mAP on the 2-class (gun vs. no-gun).

To further address the occlusion issue, Hassan et al. [10] propose an object detection technique in which the RoI is built by cascading multi-scale structure tensors that extract object orientations. The extracted RoI is fed into a CNN that overall performs better than RetinaNet, YOLOv2, and F-RCNN on GDXray and SIXray in terms of numbers and processing power. Some follow-up works [11], [12] use a similar strategy to create contour-based threat detection that achieve 96% mAP on the SIXray10 dataset.

Segmentation is understudied due to datasets with limited pixel-level ground-truth.

In a work [14], named GANomaly, the generator is constructed up of encoder-decoder-encoder sub-networks. The model aims to learn how a normal (threat-free) image would look like to identify threats during inference via subtracting its predictions from a test image. The model achieves statistically and computationally superior results than the prior state-of-the-art techniques. (AUC: UBA: 64.3%, FFOB: 88.2%). Skip-GANomaly [15] improves the previous work [14] by 1) employing skip-connections in the generator network to accommodate higher quality images and 2) learning latent representations in the discriminator network (AUC: UBA: 94%, FFOB: 90%).

Another anomaly detection model [16] shown in Figure 7, where the system is trained only once, detects and removes contraband items regardless of their scanner parameters. The one-staged solution reconstructs normal baggage images using an encoder-decoder network and a stylization loss function. The model identifies anomalous regions by comparing the original and generated scans. Clustering and post-processing of anomalous regions localizes the threats via a bounding box. A classifier can be optionally added to the suggested framework to classify extracted anomalies. A thorough evaluation of the proposed system on four public baggage X-ray datasets without any re-training shows that it achieves competitive performance compared to traditional fully supervised methods while outperforming state-of-the-art semi-supervised and unsupervised baggage threat detection frameworks by 67.37%.

Figure 7. An unsupervised anomaly detection pipeline where the model is trained on normal images during training to find the threats during inference. (This figure is taken from [16].)

The previous models had certain limitations to recognize threats in baggage across different scanner types without a specific retraining process. To get around this, a new meta-transfer learning-driven tensor-shot detector [17] breaks the input scan into dual-energy tensors and uses a meta-one-shot classification backbone to recognize and localize the cluttered baggage threats (see Figure 8). Also, the proposed detection framework can be used with many different types of scanners since it can classify objects from unified tensor maps instead of different raw scans. The model is tested on the SIXray and GDXray datasets. On the SIXray dataset, the proposed framework yields a mAP score of 64.57, and on the GDXray dataset, it achieves a precision score of 94.41 and an F1 score of 95.98. Also, it does better than the best frameworks on the SIXray and GDXray datasets by 8.03% in terms of mAP, 1.49% in terms of precision, and 0.573% in terms of F1. 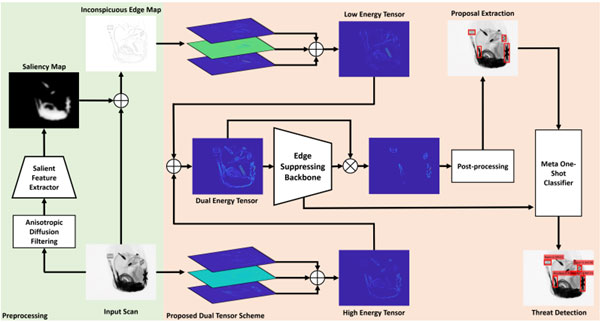 Despite the good performance of the presented techniques, several limitations may be identified. This section analyzes the problems and potential directions based on the current methodologies described in this study and the larger literature, including contemporaneous work to that presented here.

Use of the Material Information

Dual-energy X-ray systems use attenuation between high and low energies to classify/detect objects more accurately [18]. There have been some efforts studying this to some extent; however, future work could further investigate this problem.

The current algorithms for finding anomalies that are described in this blog post do not always work well to be used in the real-world use-cases. So, more research needs to be done on this topic to come up with better reconstruction techniques that learn the normal characteristics that can be used to find the abnormal ones.

Another limitation of the existing datasets is that the number of available classes is limited, which reflects real-world use-cases. In addition, the definition of a threat evolves over time, and models are expected to identify new threats. With the existing (supervised) approaches, however, this is usually not possible. To be able to deploy in a real-world setting, we need to develop a lifelong threat detection system capable of recognizing new types of threats. This could potentially be achieved via incremental few-shot training.

A growing number of airports across the globe are evaluating the implementation of 3D CT machines to enhance the screening process in their airports. This creates an exciting new research topic to be studied.

Overall, this study examines the strengths and drawbacks of present methodologies, gives a full discussion of open difficulties, and foresees the future paths of the subject.