Facial expression is a form of nonverbal communication, serving as a primary means of conveying social information between humans. It is also highly related to humans’ emotion, mental states, and intentions. Facial expression recognition (FER) has received significant interest from computer scientists and psychologists over recent decades. Although great progress has been made, facial expression recognition in the wild remains challenging due to various unconstrained conditions, e.g., occlusion, various poses.

For human beings, even though the faces would be partially occluded, people could recognize the facial expression according to the un-blocked facial regions. For example, when some regions of the face are blocked (e.g., the lower left cheek), human may judge the expression according to the symmetric part of face (e.g., the lower right cheek), or other highly related facial regions (e.g., regions around the eyes or mouth).

Inspired by the intuition, we propose a supervised convolution neural network with attention mechanism to recognize the facial expression with partially occluded faces. Through the attention module, we learn the weights for different facial regions. Then, we can perceive the occluded regions of the face and focus on the most discriminative un-occluded regions.

Fig. 1. illustrate the end-to-end learning framework of the proposed ACNN [1]. ACNN takes a facial image as input. The image is fed into a convolutional net and is represented as some feature maps. Then, ACNN decomposes the feature maps of the whole face into multiple sub-feature maps, which represent different facial regions of interest (ROIs). Each representation is weighed via a proposed Patch-Gated Unit (PG-Unit) that computes an adaptive weight from the region itself according to the unobstructedness and importance. As can be seen in Fig. 1, the last three visualized patches are blocked by the baby’s hand and thus they have low unobstructed-ness (ap). Besides the weighed local representations, the feature maps of the whole face are encoded as a weighed vector by a Global-Gated Unit (GG-Unit). Finally, the weighed global facial features with local representations are concatenated and serve as a representation of the occluded face. Two fully connected layers are followed to classify the face to one of the emotional categories. ACNNs are optimized by minimizing the softmax loss. 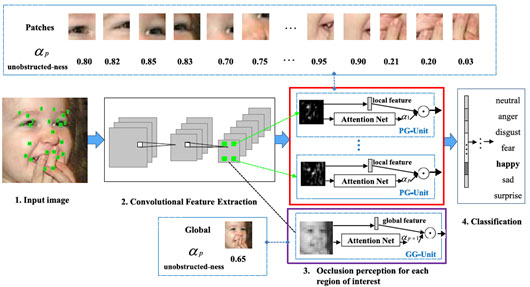 The proposed ACNN is an early attempt to successfully address the facial occlusions by attention mechanism. It was evaluated on both real and synthetic occlusions, including a self-collected facial expression dataset with real-world occlusions, the two largest in-the-wild facial expression datasets (RAF-DB and AffectNet) and their modifications with synthesized facial occlusions. Experimental results show that ACNN improves the recognition accuracy on both the non-occluded faces and occluded faces. Visualization results demonstrate that, compared with the CNN without Gate Unit, ACNNs are capable of shifting the attention from the occluded patches to other related but unobstructed ones. Due to ACNN’s effectiveness, some other works [2], [3] extend ACNN to address the occlusion issues in facial expression analysis. 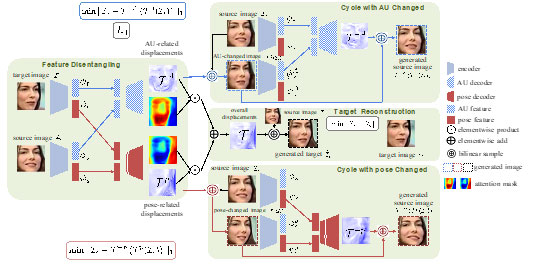 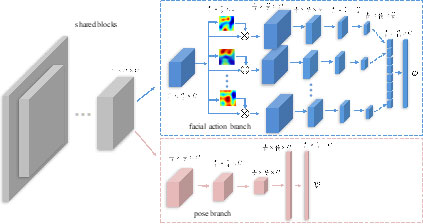 To distinguish the movement induced by facial actions from those by head motion, we design a region perceptive encoder with multiple attention masks to extract the facial action features [4]. Figure 2 illustrates the framework of the self-supervised facial action representation learning framework, where the attention mechanism is embedded in the encoder. It consists of four parts: feature encoding and decoding, cycle with facial actions/pose changed and target reconstruction. In feature encoding and decoding, we encode the input images as features and then decode the features into two-pixel displacements that represent the movements induced by facial actions and head motions between two facial images, respectively. We introduce attention mechanism into the encoder to capture the local facial features. Structure of the encoder is shown in Fig. 3. Through the attention module in the encoder, we are able to discover the discriminative facial regions in an unsupervised manner and to achieve self-supervised representation that improves the performance of facial action unit detection. To make the separated movements meaningful in the physical world, in the two cycles, we control the quality of the three generated faces by maintaining the consistency between the real images and the generated images. In target reconstruction, we integrate the separated movements and uses it in transforming the source image to the target one, ensuring that the two movements are sufficient to represent the changing between the two face images.

The proposed self-supervised method is an early attempt to discover the discriminative facial regions in an unsupervised manner. It is also an early attempt to learn facial action representations that are disentangled with head motions. The proposed method is comparable to state-of-the-art facial action unit detection methods on four widely used benchmarks.