Activity Update from the SAM-TC

Home » Activity Update from the SAM-TC 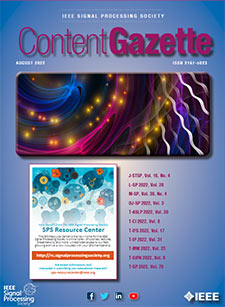 Activity Update from the SAM-TC

Several elections took place in the Sensor Array and Multichannel (SAM) technical committee (TC). We congratulate Peter Willett and Martin Haardt for their election and assignment as new SAM TC Chair and Vice-Chair, respectively. We especially thank our past SAM TC Chair Dominic K.C. Ho who was chairing the SAM TC in the past two years for his excellent leadership and dedication.

The SAM Technical Committee is proud to be successful with 4  Award nominations in the IEEE Signal Processing Society.

The 40th IEEE International Conference on Acoustics, Speech, and Signal Processing (ICASSP 2015) will be held during April 19-24, 2015 in Brisbane, Australia. ICASSP will feature plenary talks by Iain Johnstone, Pramod K. Varshney, Rob Evans, Richard Baraniuk and Neil Gordon as well as 17 high-quality tutorials on diverse and timely topics for the signal processing community. A total number of 206 original papers have been submitted to ICASSP that fall under the SAM category, out of which 114 papers were accepted. These papers together with 7 Signal Processing Letters presentations are comprised in 5 lecture and 8 poster sessions. We hope to meet you soon in Brisbane!

We would like to announce that following the success of previous CAMSAP workshops the biannual IEEE workshop on Computational Advances in Multi-Channel Sensor Array Processing (CAMSAP 2015) will be held in Cancun, Mexico from December 13-16, 2015. The General Co-Chairs Petar M. Djurić and Jean-Yves Tourneret as well as the Technical Program Co-Chairs Fulvio Gini and Cédric Richard are working hard to make the CAMSAP 2015 a memorable event.

Further information is available at: http://inspire.rutgers.edu/camsap2015/

We would like to point out that in this year unfortunately the GlobalSIP is organized at the same time as CAMSAP, which causes some undesirable overlap.

Further information is available at: http://sam2016.cetuc.puc-rio.br/