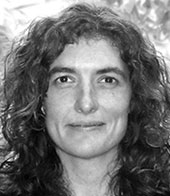 Ana Isabel Pérez-Neira (B.Sc. '89, MSc. '1991, Ph.D. 1995) is currently a professor at UPC (Universitat Politècnica de Catalunya) and scientific coordinator of the Centre Tecnològic de Telecomunicacions de Catalunya (CTTC). Her research topic is signal processing for communications, and currently, she is working in multi-antenna and multicarrier signal processing, both, for satellite communications and wireless systems. She has been on the board of directors of ETSETB (Telecom Barcelona) from 2000-03 and Vice-rector for Research at UPC (2010-13). She created UPC Doctoral School (2011). Currently, she is Scientific Coordinator at CTTC, where she is a fellow researcher. From 2008-2016, she has been a member of EURASIP BoD (European Signal Processing Association), from 2010-2016 member of IEEE SPTM (Signal Processing Theory and Methods), from 2016-2018  she has been elected SPS Regional Director-at-Large.

Currently, she is a member of the Board of Governors of IEEE Signal Processing Society and the Technical Committee on SP for Communications. She is the coordinator of the European project SANSA and the Network of Excellence on satellite communications, financed by the European Space Agency: SatnexIV. She has been the leader of 20 projects and has participated in over 50 (10 for European Space Agency). She is the author of more than 60 journal papers (25 related to Satcom) and more than 200 conference papers (20 invited). She is a co-author of 4 books and five patents (one on Satcom). She has been guest editor in 5 special issues and associate editor of the IEEE Transactions on Signal Processing, EURASIP Advances in Signal Processing and Eurasip Signal Processing. She is the EURASIP liaison for Spain. She has been the general chairman of IWCLD'09, EUSIPC'11, EW'14, IWSCS'14, and ASMS/SPSC'16. She is the recipient for the 2018 EURASIP Society Award. She is the general chair of IEEE ICASSP'20.

I have always liked mathematics, not only because they are beautiful perse, but also because they allow solving any technical problem that you can imagine, and they help others to progress further by building on this solution: they are the universal language. Since High School, I had it clear that I wanted to apply mathematics to solve engineering problems. My choice for electrical engineering (EE) was a little bit by chance as there was an EE School on the way to my High School, so why not to give a try?

When I began studying EE, I became more and more passionate about it, the more I learned, the more vocational was the discipline for me. I guess it could have happened with other engineer studies that I may have chosen, but I had already tossed the coin for EE. While being in the university, I studied the German language and did two internships in two different companies in Germany. Although I was offered a job in one of them, I did want to continue studying, and I accepted a position as an assistant professor for the classes on Acoustics at UPC. This position was within the Signal Processing group, and after having done my master thesis in Image processing at the Universitat Ramon Llull, I had the opportunity to do a Ph.D. in Signal Processing for communications with Prof. Miguel Angel Lagunas. In my research group at UPC, I was involved in many exciting projects, and I could attend many related meetings and conferences; thus, being exposed to collaborate with international researchers all over the world. Many of these researchers are nowadays very good friends of mine.

After having finished my Ph.D. in 1995, I worked mainly in waveform design and multi-antenna aspects for the different wireless communication standards, 2G, 3G, 4G. In 2005, being the second woman in Spain that was qualified to be a professor in Signal Theory and Communications, I was habilitated to be a university professor. After serving for four years in the Board of Governors of ETSETelecom Barcelona, I went to the Royal Institute of Technology (KTH) in Sweden for a sabbatical with Prof. Björn Ottersten. There, I had the opportunity to develop multi-antenna multiuser estimation and access, with emphasis on cross-layer techniques for resource allocation among users. When I came back, I was appointed by the rector of UPC to be vice-rector for research. When I accepted, I knew that it was not going to be an easy task as I wanted to keep my research in spite of taking over this new position. However, it has always been worth the work. Among other things, I am proud of having found the UPC Doctoral School, which was highly appreciated by the university community, mainly by the young researchers. In general terms, I like to serve the research community and create opportunities for researchers; helping to put them in practice is a driving force for me. For instance, now that I am the general chair of ICASSP 2020 in Barcelona, I conceive it as a perfect forum to develop different initiatives, to meet researchers and industry, and to motivate young researchers towards signal processing.

Q. "Why did you become a scientific coordinator of CTTC?"

The experience that I have gained along all these years allowed me to be in 2014, the scientific coordinator of CTTC, which is a research center in telecommunications in Spain. My responsibility there is that CTTC stands as a leading institution in the field, looking for new avenues for research. As I have always tried to develop activities that positively feed each other, I was glad of being nominated for different scientific boards. First the European Association for Signal Processing – EURASIP, afterwards I was IEEE Director-at-large of Signal Processing for Region 8, and currently, I am in the Board of Governors of IEEE Signal Processing Society (SPS), and I am part of the SPS long-range planning committee. This latter activity perfectly matches with my Scientific Coordination at CTTC, which I currently develop together with my research on physical layer techniques for satellite communications. These are long-range communications and, as such, they are very dependent on the type of beamforming that is implemented, and there is a lot of room for research on multi-antenna techniques.

Being a professor in a technical university, I try to educate people so that they become responsible workers and engineers, are motivated by their work; they try to do their best and feel passionate about it. In general, I would say that I like to serve whenever I can, and I try to do it altruistically, with innovative ideas and creating opportunities for the professional development of young people.

I have worked very hard, but it has always had rewarding results. What people like is the commitment, reliable work, and determination. I aim at behaving in this way, and that would be my piece of advice to others. Although, sometimes I have had the feeling that a woman that is passionate for her work is not always well or perceived properly in the sense that people are sometimes more afraid of her than of a man with the same behavior. This is something that women must help to change by keeping on being passionate.

My piece of advice is first to study the basis of signal processing, and study so that you not only know but also understand the concepts. Second, once you chose a domain to apply it, keep the focus on it as much as possible. In this way, you will develop your vocation as an expert engineer. Third, give a lot of importance to the model of the problem. It has to be realistic and not just devised to create a publication out of it; we have to aim at developing relevant work. Finally, be imaginative and creative; be free.