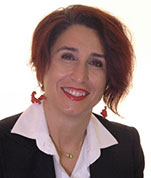 Dr. Maria Sabrina Greco graduated in Electronic Engineering in 1993 and received a Ph.D. degree in Telecommunication Engineering in 1998, from the University of Pisa, Italy. From December 1997 to May 1998, she joined the Georgia Tech Research Institute, Atlanta, in the USA as a visiting research scholar where she carried on research activity in the field of radar detection in non-Gaussian background. In 1993, she joined the Department of Information Engineering of the University of Pisa, where she is a Full Professor since December 2016. She is an IEEE fellow since January 2011 and was the co-recipient of the 2001 and 2012 IEEE Aerospace and Electronic Systems Society’s Barry Carlton Award for Best Paper. She is also the recipient of the 2008 Fred Nathanson Young Engineer of the Year award for contributions to signal processing, estimation, and detection theory.

She is the Associate Editor of IET Proceedings - Sonar, Radar and Navigation, Editor-in-Chief of the IEEE Aerospace and Electronic Systems Magazine, member of the Editorial Board of the Springer Journal of Advances in Signal Processing (JASP), Senior Editorial board member of IEEE Journal of Selected Topics in Signal Processing (J-STSP), and Senior Area Editor of the IEEE Transactions on Signal Processing. She is also a member of the IEEE AES and IEEE SP Board of Governors and Chair of the IEEE AESS Radar Panel. She was also the SPS Distinguished Lecturer for the years 2014-2015, AESS Distinguished Lecturer for the years 2015-2017, member of the IEEE Fellow Committee and chair of the EURASIP Special Area Team on "Signal Processing for Multisensor Systems (SPMuS)". In May and June 2015 she joined the Université Paris Sud, CentraleSupélec as a visiting professor. She has played a major role in several international conferences such as the 2007 International Waveform Diversity and Design Conference (WDD07), the 2006 EURASIP Signal and Image Processing Conference (EUSIPCO), ICASSP 2014, and CoSeRa 2015. She has

Her general interests are in the areas of statistical signal processing, estimation, and detection theory. In particular, her research interests include clutter models, spectral analysis, coherent and incoherent detection in non-Gaussian clutter, CFAR techniques, radar waveform diversity, and bistatic/mustistatic active and passive radars. She co-authored many book chapters and more than 170 journal and conference papers.

I was born in Lecce, a beautiful city in the South of Italy, in a region surrounded by a fantastic sea that I still miss. After high school, I moved to Pisa to study Electronic Engineering. I had no clear ideas on what to do of my life at that time, but I wanted to study “something difficult and special”. I still smile, when it comes to my mind.

I loved math and physics and I wanted to do something intriguing. Electronic Engineering seemed to be good for me. During the master's, I was fascinated by the Signal Processing and Radar Systems topics, then I decided to pursue my studies along that line. After the Ph.D. degree, I moved for 6 months to Atlanta, in Georgia, to work as a visiting scholar at the GTRI. It has been a great experience, from both the personal and the professional sides. I think I started seeing and planning my future when I was there. So, I came back to Italy, full of dreams and enthusiasm. As a researcher, you need them to survive.

I’m still in Italy, a professor at the University of Pisa, but I like to travel a lot, cooperating with many colleagues around the world. I guess the seed of my traveler life was sown there, in Atlanta, many years ago.

Q. “Why did you become a full professor at the University of Pisa?”

My parents have been a teacher at the elementary school for 35 years, and, when I was a kid, I used to hate that kind of job. I thought it was always the same, year after year, and, in my mind, this was too boring. I always used to say: I will never teach unless it will be at the University. Then, during my master thesis, I fell in love with research and I decided to pursue my studies as a Ph.D. student. I’m still happy with my choice and I love my job. It has been a long way to become a full professor, as for many colleagues of mine in Italy, but I don’t have regrets.

As a professor, the highest impact is in educating and training young people who, eventually, become good engineers and researchers. I have taught hundreds of them over the years, and seeing them realized in their jobs makes me happy.

As a researcher, helping technologies to grow is an important point. Sometimes the impact is not immediate, it takes some time. But, it is always a great reward seeing your work implemented in real systems or cited as a reference breakthrough by your peers. In my area of expertise, signal processing for radar applications, the time between the publication of an idea and the realization is not short because it is not easy to renew a radar system. So you must be patient and confident.

The greatest challenge I had to face has been to get confidence in myself and my technical skills. As a Ph.D. student and then a young researcher, I was shy. Surrounded by many international excellent researchers I was intimidated. I still remember my first conference in 97: it was a shock. I realized I had two options: work on myself and become confident or change my job. I’ve chosen the first option and I guess I won the challenge. So, I always try to pass and share my enthusiasm and my passion to my students. I encourage them to love what they study and to find their way. There are always many obstacles along the way, in all the professions, and you need a good deal of self-confidence to overcome them.

The same I give to my students: be curious and never give up. There are plenty of opportunities in our technical word and technology is becoming more and more pervasive in our life. That’s why I like the subtitle of SPS: the science behind our digital life. It’s exactly what we are and what we can do. But you need to be focused, motivated, passionate and self-confident.

I don’t want to open here a discussion on the gender balance in STEM, but I see often that, for social reason or tradition, female students and young researchers are less confident than their male peers when it comes to propose their ideas and promote their selves. It is not fair for anyone. Having a loud voice in the discussions does not mean you are smarter, but being silent does not help to convey any message and proposal. Leave your comfort zone and speak up.