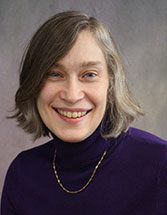 Dr. Amy R. Reibman is a Professor of Electrical and Computer Engineering at Purdue University. Dr. Reibman received the B.S., M.S., and Ph.D. degrees in Electrical Engineering from Duke University. She joined Purdue after 23 years of industrial research at AT&T Labs-Research, where she was a Distinguished Member of Technical Staff and a Lead Inventive Scientist. Prior to that, she was an Assistant Professor in the Department of Electrical Engineering at Princeton University. Dr. Reibman was elected IEEE Fellow in 2005, for her contributions to video transport over networks.  In 1998, she won the IEEE Communications Society Leonard G.  Abraham Prize Paper Award.  She was a Distinguished Lecturer for the IEEE Signal Processing Society from 2008-2009, was a member of the IEEE Awards Committee from 2010-2012, served on the IEEE Fellow Selection committee from 2012-2015, and the IEEE Fellow Selection Strategic Planning committee in 2013-2015. Dr. Reibman’s technical interests are in image and video quality assessment, video transmission, and video analytics.

Q. Please tell us about yourself and your background.

I was the youngest of 4 children; my father was an engineer and my stay-at-home mother was a computer programmer both before and after raising her kids. My brother brought home an acoustic coupler one weekend, introducing me to computers and programming well before middle school. In about 7th grade, I became fascinated with astronomy and set out to learn as much as I could about it. The combination of continued exposure to math and science throughout high school, a 6-week immersion in astronomy at the Summer Science Program, and my love of math made my choice to become an engineer easy. Moreover, I was naïve enough to think that if I were an engineer, I’d never have to write anything ever again! What could be better than that?!?

With this starting point, the path became a bit more winding. As an undergraduate, I started at one university as a mechanical engineering major, then changed universities, then changed majors, finally graduating with a focus in computer engineering. In graduate school, I started focusing on signal processing. After getting my Ph.D., my interests narrowed further into the fields of image and video processing, which continues to inspire me today.

Q. Why did you become a Professor at Purdue University?

Right after my Ph.D., I started as an Assistant Professor of ECE at Princeton University.

Academia was not a good fit for me at the time. I did not thrive there, but it was a period of learning and significant personal growth. A summer research position at AT&T Bell Labs turned into a full-time opportunity. There, with a steady influx of real-world problems and working side-by-side with experts who were developing the video technology we all rely on today, I began to thrive. Despite ups and downs and twists and turns, working in an industrial research lab was a perfect fit for me. Until one day, it no longer was. I still don’t know exactly why, but that day I announced aloud “I wonder what it would be like to become a professor again!”.

Implementing the shift from industry to academia and adjusting to the associated changes were both challenging and stimulating. However, in my opinion, leaving academia and returning to academia were the two best career decisions I’ve made.

Q. How does your work affect society?

Recently, many of us have switched to using video conferencing to conduct our daily business. The tools we use today are founded on the principle that the best video quality can be obtained when the network and the video system are jointly designed. This was the guiding principle behind the work my colleagues and I published in ACM Sigcomm in 1993. At that time, we envisioned that the network itself would provide the congestion feedback that would inform the rate-adaptation of the video encoder, and we backed this concept up with visual evidence that rate adaptation outperformed other methods. In today’s video systems, information for rate adaptation is generated near the video decoder, but the same principle applies. Learn how much bandwidth is available; then use as much as possible but never more.

In the last few years, I have shifted my focus to extracting information from videos captured in real-world scenarios. Specifically, within the agricultural space, many tasks rely on visual observation. For example, the operator of a combine harvester is constantly scanning the environment, and a dairy operator visually assesses cows for lameness. My current efforts explore how the recent impressive advances in computer vision can be applied to assist these tasks.

Q. What challenges you had to face to get where you are today?

It is easier to state a few challenges I did NOT have to face, than to enumerate those that I did. Suffice it to say I encountered my share of personal, family, health, and professional challenges. It was when these coincided with each other that things became most difficult. One challenge I am grateful that I never faced is working from home for months on end while raising and home-schooling young children. In all cases, though, to get through a challenge, I agree with Arthur Ashe: start where you are, use what you have, do what you can.

Also, despite the fact (yes, fact) that gender discrimination pervades engineering, I am very grateful for the large number of informal mentors and champions I’ve had through the years. These people saw potential in me, encouraged me, gave me opportunities to prove myself, and accepted that despite my genetic composition, there is a place for me in the STEM community.

Q. What advice would you give to scientists/engineers in signal processing?

The advice I give to everyone is to keep adapting and growing and learning new things. Express your individuality and listen to your inner voice, even if it pushes you to try difficult things. My advice for people in signal processing is more specific. Signal processing teaches you specific tools and a way of thinking about and decomposing problems. Bring that viewpoint to the technical problems you consider.