Presented by Dr. Santiago Segarra and based on an IEEE Xplore article
published in IEEE Transactions on Signal and Information Processing over Networks

The IEEE Signal Processing Society (SPS) is dedicated to promoting webinars on technical and technological innovations (and their applications) in signal processing from top researchers and thought leaders in academia and industry. In this series of upcoming webinars, we are featuring the most highly cited and most-downloaded SPS articles of 2018, and this webinar, based on the article “Network Topology Inference from Spectral Templates,” originally appeared in the IEEE Transactions on Signal and Information Processing over Networks, in 2017. This article will be made publicly available as open access and free to download on the day of the webinar.

This webinar will address the problem of identifying the structure of an undirected graph from the observation of signals defined on its nodes. Fundamentally, the unknown graph encodes direct relationships between signal elements, which we aim to recover from observable indirect relationships generated by a diffusion process on the graph. This approach leverages concepts from convex optimization and stationarity of graph signals, in order to identify the graph shift operator (a matrix representation of the graph) given only its eigenvectors. These spectral templates can be obtained, e.g., from the sample covariance of independent graph signals diffused on the sought network. The novel idea is to find a graph shift that, while being consistent with the provided spectral information, endows the network with certain desired properties such as sparsity. To that end, we develop efficient inference algorithms stemming from provably tight convex relaxations of natural non-convex criteria. 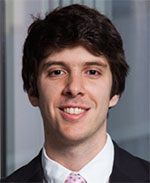 From September 2016 to June 2018, he was a postdoctoral research associate with the Institute for Data, Systems, and Society at the Massachusetts Institute of Technology, Cambridge. Since July 2018, he has been an Assistant Professor in the Department of Electrical and Computer Engineering at Rice University, Houston, TX. His research interests include network theory, data analysis, machine learning, and graph signal processing.