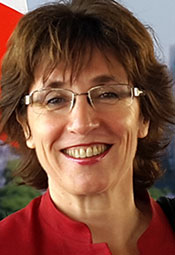 Professor Roxana Saint-Nom received her Electrical Engineering degree in 1987 from ITBA (Buenos Aires Institute of Technology, a 6 years program), Argentina. She achieved an Advanced Studies degree (Suficiencia Investigadora, 2003) in Speech Processing from the “Universidad Politécnica de Madrid”, Spain.  Since 1988 she held academic positions in Argentina until she became tenured faculty in the rank of the Full Professor in 2004. Since 2007 she was appointed Electrical Engineering Department Chair at ITBA, until 2013.

Professor Saint-Nom changed her career path in 2013 to become Engineering Director at Eurocase, a small company that designs and manufactures technology products for Latin America. She still holds this position. In 2018, she started a new position as a part-time professor at UADE (Universidad Argentina de la Empresa), where she teaches Signal & Systems and Speech Signal Processing. Dr. Saint-Nom's research area is primarily Signal Processing, Speech, and Education as subareas. In the University she started research groups in different areas, such as speaker verification, acoustics, DSP applications and EMC (Electromagnetic Compatibility). She is the author of more than 25 papers, mostly in the area of signal processing education, published in reviewed journals or presented at international conferences such as IEEE ICASSP and IEEE ISCAS. She has been a technical reviewer for the IEEE Transactions on Circuits and Systems and IEEE ICASSP Proceedings. In recent years her responsibilities were oriented to leading R+D efforts of the company to develop a range of technology products, building and implementing a detailed work plan to fulfill the company's development objectives and developing software prototypes for a range of products based on company's technology.

In addition, Dr. Saint-Nom is an active senior member of the IEEE. She is the founder of the IEEE Signal Processing Society (SPS) Argentina Chapter, from which she was Chair (2004-2005 and 2008-2009) and 2008 SPS Region 9 Chapters Committee member. She organized and moderated a panel at ICASSP 2009. She was IEEE SPS Education Technical Committee Chair (SPEd TC 2007-2009), she was SPS Conference Board Member and an IEEE SPS Lensing Oversight Committee Member (Rice University initiative) as part of the SPEd TC. Dr. Saint-Nom was IEEE SPS Regional Director-at-large (2011-2013) for Regions 7 and 9, IEEE Women in Engineering Committee member, as SPS liaison (2012-2013), SPS Membership Board member at the Education subcommittee (2012-2015). She has been the Fourier Award Committee member (2016-2018) and Industry Relations subcommittee member (since 2017). Dr. Saint-Nom is now TAB Representative as a voting member at WIEC (Women in Engineering Committee).

Q. What challenges did you face to get to where you are today?

I would say my career was defined by many challenges!

When I chose to become an Electrical Engineer in Argentina some 35 years ago, I was advised to go to other fields. It was not suitable for a girl, nor would I get a job. Most women in engineering courses at the time were there to find a match. “Should you be watched like that?”, friends told me. I couldn’t care less. I wanted to be an Electrical Engineer, no matter what.

The long 6 years program at the University gave me a lot of good memories and a certainty that technology was my call. There were no engineer graduate programs at the time, except for a few doctorate scholarships in specific areas that didn’t match with my career. So I decided to begin a family and start working in the industry.

I was faced with another challenge: How to get a job! My credentials were impeccable but I lacked the number one requirement to get a junior position at a technological company: I was not a man! Interviews ended abruptly after I “confessed” I was about to marry a University classmate and future professor and maybe we would have children. Regardless, I got the match I wasn’t looking for! Finally, I landed a research position (for an undergraduate level) at a government agency. I didn’t like the job, but my approach to research awakened my adventurous soul once again.

After my first child, I managed to find a job in the industry, but with little to nothing related to my research curiosity. At the same time, I was a teaching assistant at the university I attended. Managing two jobs and a family was not easy, however, after a couple of years, I found the strength to pursue my dream. I left my good position in the industry and started a tenured career at the University. I dedicated full time as an undergraduate professor and distant-masters/doctorate student. What a challenge! I was not complaining though, as I felt it was my path.

But destiny has a word there as well. Without any planning, I’ve got pregnant again. We decided that our family will grow. We couldn’t think otherwise. My little daughter was fascinated and the happiness my condition brought to all of us deserved any career change. But once again a bigger challenge appeared. The first echography revealed twins! What a turn to my life was in front of me. What should I do? There were long nights where I cried sweet & sour tears. I felt joy and gratitude for the gift of life, but we had to feed a bigger family with a not so good paid job as professors.

Q. What advice would you give to scientists/engineers in signal processing?

Do not despair! Your big family will help you! There was my mother, my sister and my sisters-in-law. So I stopped the doctorate and finished my master’s track. Soon enough I applied for promotions at the University. A few years later, I received the EE Department Chair (female) position. I could start my own research team in Signal Processing and help develop graduate programs under my guidance! My whole family was part of my endeavor, therefore I shared my success with them. In life, long-term roots always have a role to play in our crooked pathways to success.

There were other incentives that were certainly an asset. My volunteer positions at the IEEE Signal Processing Society engaged me in different contributions and networking that I am thankful for every day. You may never know which position, idea or chat with colleagues may ignite new motivations to go along. Undoubtedly, I’ve made friends around the world, which I cherish the most.

My career continued to change in many ways after that, but my commitments are strong and I don’t regret to have faced challenges. As an Argentinian female engineer, I can assure you that difficulties are everywhere, which you can process as opportunities to prove your resilience. Welcome them all!