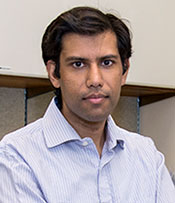 Dr. Varshney is a distinguished research staff member and manager with IBM Research at the Thomas J. Watson Research Center, Yorktown Heights, NY, where he leads the machine learning group in the Foundations of Trustworthy AI department. He was a visiting scientist at IBM Research - Africa, Nairobi, Kenya in 2019. He is the founding co-director of the IBM Science for Social Good initiative. He applies data science and predictive analytics to human capital management, healthcare, olfaction, computational creativity, public affairs, international development, and algorithmic fairness, which has led to recognitions such as the Gerstner Award for Client Excellence for contributions to the WellPoint team, the Extraordinary IBM Research Technical Accomplishment for contributions to workforce innovation and enterprise transformation, and the Harvard Belfer Center Tech Spotlight runner-up for AI Fairness 360. He conducts academic research on the theory and methods of trustworthy machine learning. His work has been recognized through best paper awards at the Fusion 2009, SOLI 2013, KDD 2014, and SDM 2015 conferences and the 2019 Computing Community Consortium / Schmidt Futures Computer Science for Social Good White Paper Competition. He is currently writing and self-publishing a book entitled Trustworthy Machine Learning. He is a senior member of the IEEE.

We approached Kush Varshney with a few questions:

Since completing a PhD at MIT under the tutelage of Alan Willsky in 2010, I have been a machine learning researcher at IBM Research’s T. J. Watson Research Center in New York. I continually use the model-based thinking I developed while studying signal processing to develop new theory and methods at the intersection of artificial intelligence and society, and guide a team to do the same. I work on the considerations of machine learning beyond accuracy that are important for making predictive models worthy of people’s trust in high-stakes decision making, such as privacy, fairness, interpretability, robustness, transparency, safety, and inclusivity. I also co-founded (with my manager Saška Mojsilović) the IBM Science for Social Good initiative through which we’ve conducted over 35 applied data science projects partnering with several non-profits and social enterprises addressing poverty, hunger, ill health, and inequalities of various kinds. I have had the pleasure to shepherd the creation of the widely-used open source Python toolkits AI Fairness 360, AI Explainability 360, and Uncertainty Quantification 360 as well as be a visiting scientist at IBM Research Africa in Nairobi, Kenya.

My journey has been mostly without undue challenges due to the privileges of being the son and grandson of electrical engineering professors.

Perhaps one thing I’ll say relates to working on algorithmic fairness. There are various sources of knowledge currently being used in the field, including philosophy, statistics (and statistical signal processing), and critical theory (the study of societal values with the purpose of challenging power structures; it includes critical race theory, feminism, and post-colonialism). In school, I thrived in social studies classes as much as in math, but critical theory has been a step ahead of my thinking and it’s been challenging to catch up. A lot of critical theory is based on personal lived experience of marginalization, which I have not overtly faced. I’ve tried to learn directly from people who have that lived experience and I’ve also been introspective about my experience as a person of color in the United States.

At the 2019 Deep Learning Indaba, I was exposed to a proverb from Sudan: “We desire to bequeath two things to our children; the first one is roots and the other is wings.” I owe my solid roots and wings to my amazing parents, especially my mother. She gave my life structure and consistency without inhibiting an orderly mess, and epitomized authoritative parenting before it entered the lexicon. Moreover, I would not have had half the success I have achieved without my twin brother Lav alongside, pushing and pulling me throughout the journey.

My work is intimately tied to society and tries to ensure the most vulnerable individuals and groups are not harmed by technology and are given a chance to escape vulnerability on their own terms. Specifically, my research on algorithmic fairness, transparency, and robustness contributes to non-harm and my work with non-governmental organizations empowers them to be more effective agents of positive social impact.

5. If there is one take home message you would want the readers of this interview to take away, what would that be?

It is estimated that all of us put in 80,000 hours during our careers. Signal processing is so broadly applicable that we can all find something to help uplift humanity during a part of that time, and really accomplish a lot for the world.

6. Failures are an inevitable part of everyone’s career journey. What is the most important lesson you have learned during your career when dealing with failures?

When you’re in a psychologically safe environment, failure is not a bad thing. It is something to learn from. It is said in a book I read to my kids, Rosie Revere Engineer, “Your brilliant first flop was a raging success! Come on, let’s get busy and on to the next!” For example, I recently had a book contract canceled by the publisher after I had completed two-thirds of the manuscript. I have learned from the experience and am self-publishing the book at http://www.trustworthymachinelearning.com and can now reach a broader audience.

My friend Dashun Wang at Northwestern University found that a precursor to a hot streak (a research scientist, film director, or musician having several acclaimed works in a row over a small number of years) is to explore several different things, many of which fail. So failure is just a way to get ready for success. But when you do find success, keep building on it-like I’ve done the last few years with trustworthy machine learning.

7. Although novelty and innovation is the most important factor for technology advancement, yet when a researcher, scientist or engineer has a new idea there are a lot of push backs until they prove that the new idea actually works. What is your advice on how to handle them? Especially for the readers who are in the  early stages of their career.

At my graduation ceremony from Cornell in 2004, the president of the university, Jeffrey Lehman, ended his speech with a list of several hopes for the graduates. One of them was, “May you enjoy the special pleasures of craft—the private satisfaction of doing a task as well as it can be done.” As an engineer, be satisfied when you’ve done your best in coming up with the idea. Another of his hopes was, “May you never be afraid to take the risk of getting dirty, but may you always be sufficiently sure-footed that you avoid the abyss of contamination.” Keep pushing for your idea, including getting into the politics it may involve with product managers and executives to the point that it is reasonable to keep pushing. And, “May you know enough bad weather that you never take sunshine for granted, and enough good weather that your faith in the coming of spring is never shaken.” Even if this one idea isn’t eventually put in production, you’ll keep having more new ideas.

8. Is there anything else you would like to add?

Thanks for having me.

To learn more about Kush R. Varshney and for more information, visit his webpage.