Mounting evidence has exposed the potential vulnerability of biometric authentication systems to spoofing. Spoofing attacks are also known as presentation attacks in ISO nomenclature [1]. In response, there has been a movement in the academic community over the last two decades to develop spoofing countermeasures. The research is now relatively mature, with several competitive evaluations having been organised for various modalities including face [2], fingerprint [3] and iris [4] recognition.

The first significant action within the speaker recognition community involved the organisation of a Special Session at Interspeech 2013 entitled `Spoofing and Countermeasures for Automatic Speaker Verification' [5]. An IEEE SLTC newsletter article [6] released in conjunction with that initiative set out the importance to research progress of standard datasets, protocols and metrics.

The authors of this article subsequently embarked upon the preparation of the first standard evaluation for automatic speaker verification (ASV). This came to fruition in the form of ASVspoof: the Automatic Speaker Verification Spoofing and Countermeasures Challenge [7]. The first edition, ASVspoof 2015 [8], was held as a special session at Interspeech 2015. This article outlines the challenge, participation, results and the organisers' plans for a second edition.

In 2013 there were no standard datasets, protocols or metrics to gauge and tackle the threat of spoofing to ASV systems. ASVspoof was conceived to fill the void through the provision of an evaluation platform which allowed, for the first time, results generated by different research teams to be compared reliably.

Whereas it is the impact of spoofing and countermeasures on ASV performance that is of the greatest interest, ASVspoof focused exclusively on spoofing detection, that is to say, detection in isolation from ASV. This choice was adopted mainly for simplicity; decoupling the evaluation of standalone spoofing detection from the complexities of ASV avoids certain complications related to what would otherwise involve the joint evaluation of two, coupled systems [9]. This strategy furthermore helped to maximise participation which required no prerequisite expertise in ASV.

he ASVspoof 2015 dataset is based upon the Spoofing and Anti-Spoofing (SAS) corpus [10] and contains speech collected from 106 speakers. The dataset comprises three distinct, non-overlapping subsets for training, development and evaluation. The training and development subsets contain both genuine speech and spoofed speech. All examples of the latter are generated artificially using one of five different, well-known speech synthesis or voice conversion spoofing algorithms and one of two different vocoders.

The evaluation subset also includes genuine speech and almost 200k spoofed speech utterances, this time generated with one of 10 different spoofing algorithms. They include the same five algorithms used to generated the training and development subsets (referred to as known attacks) and five additional algorithms (referred to as unknown attacks not used elsewhere). In this sense, better performance is expected in the case that countermeasures generalise well to unknown spoofing attacks.

With the focus of ASVspoof 2015 on spoofing detection alone, it was important to verify first that the spoofing attacks are indeed successful in manipulating an ASV system. Figure 1 illustrates detection error trade-off (DET) profiles for a standard, baseline iVector-PLDA system and the same system subjected to each of the 10 different spoofing attacks (S1-S10) included in the ASVspoof 2015 dataset. These results show that they all pose a genuine threat to ASV performance, with the baseline equal error rate of 2% increasing to between 3% and 44%. 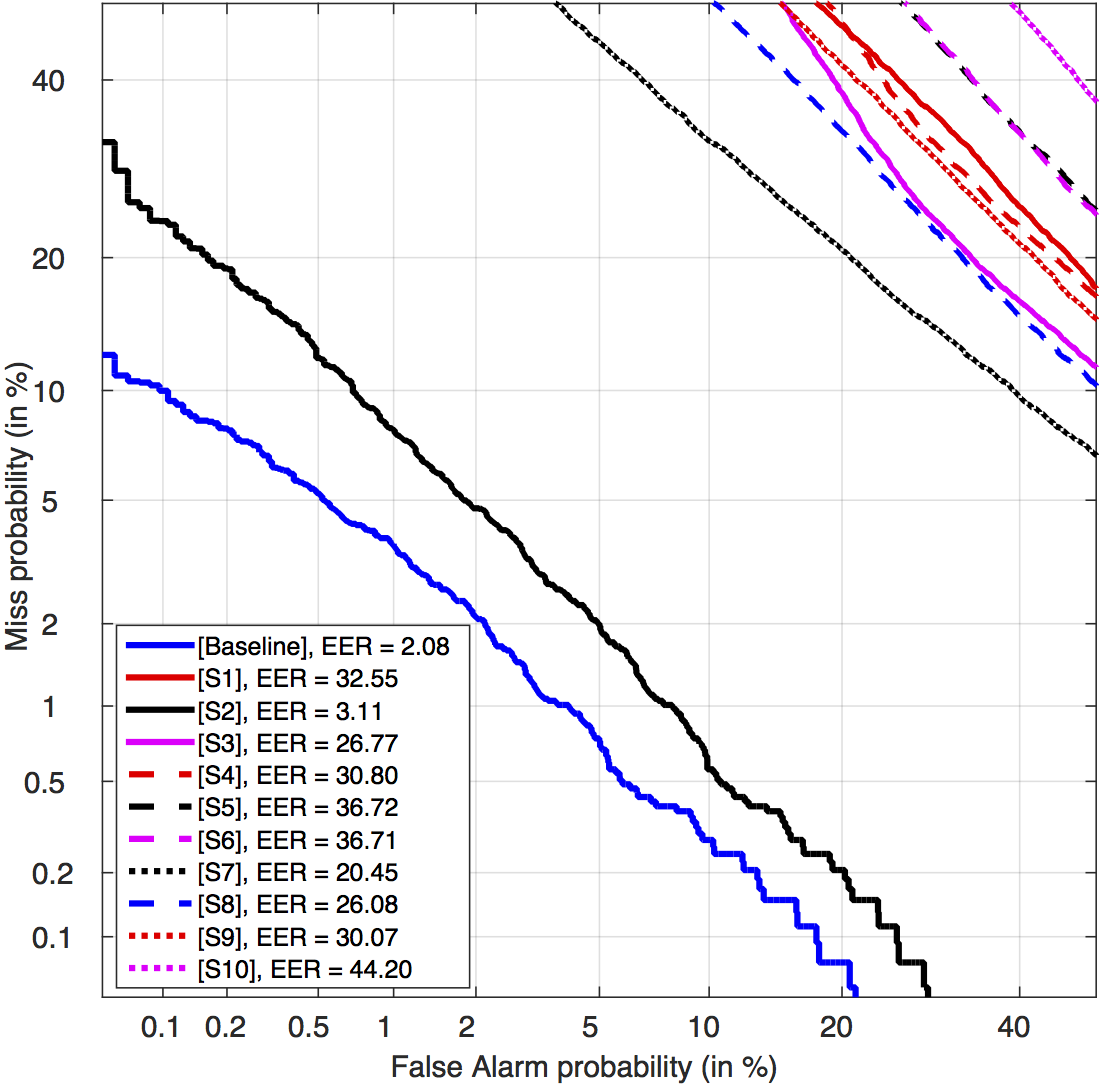 Figure 1: DET profiles of ASV performance for the iVector-PLDA baseline and the same system subjected to each of the 10 different spoofing attacks (S1-S10).

The organisers received 43 submissions from 16 participants. Figure 2 shows a Tukey boxplot of the 16 primary submission results for the evaluation set, sub-divided across known and unknown spoofing attacks. The left, red box shows that the known attacks, for which training and development data are provided, are detected relatively easily. The right, green box shows considerably higher error rates are achieved for the unknown attacks, for which no training or development data are not provided. 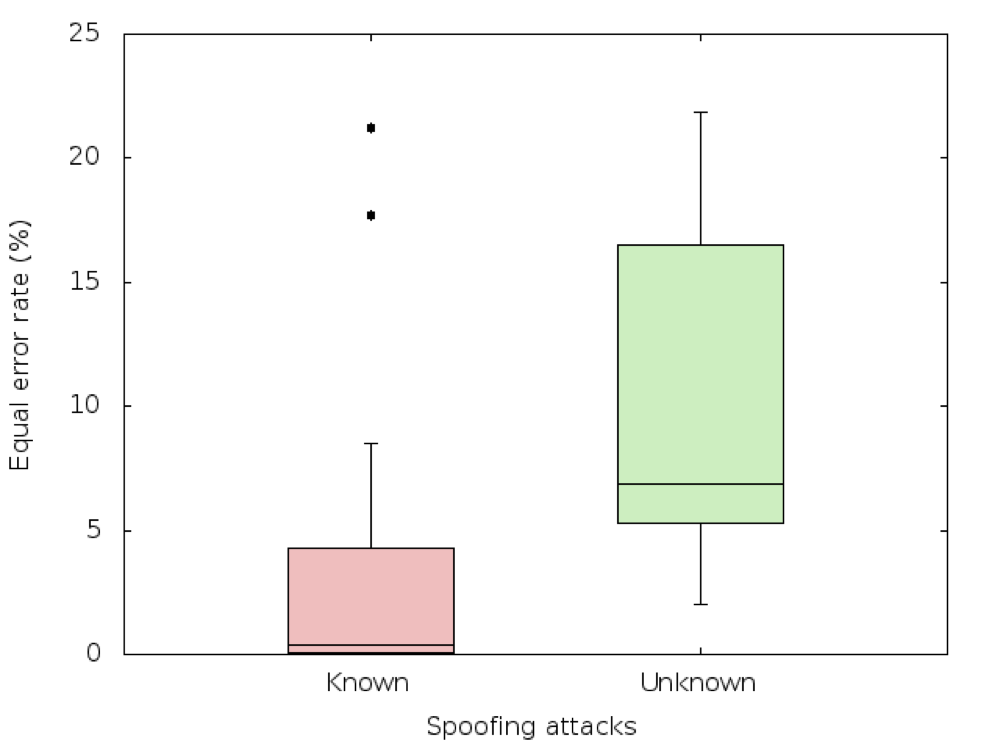 Figure 2: Tukey boxplots of spoofing detection performance. The plot illustrates the distribution of equal error rates for the 16 primary submissions to ASVspoof 2015 and for known and unknown spoofing attacks.

The system that achieved the best results for unknown spoofing attacks [11] achieved an equal error rate of 2% cf. 0.5% for known attacks. Even if these error rates are low, that for unknown spoofing attacks is still four times higher than that for known attacks. Furthermore, even small spoofing detection error rates can impact significantly on the false alarm rate of an ensuing ASV system. The problem of spoofing detection is thus very much far from being solved.

The ASVspoof special session at Interspeech 2015 included a lively open feedback and discussion session. Ideas for future consideration include a broader variety of spoofing attacks including impersonation and replay, the consideration of text-dependent speaker recognition, noise and channel effects, a comparison to human liveness detection, speaker dependent countermeasures and a study of the data quantities used to effect spoofing attacks. There was also a suggestion to develop more appropriate metrics for the study of spoofing and countermeasures.

More general feedback questioned the focus on spoofing as only one example of how ASV technology may be compromised and also suggested that greater insight into these threats might be gained from collaboration with the forensic and other related communities, e.g. those of voice conversion and speech synthesis. All of these issues will contribute to the authors' plans for a future, second edition of ASVspoof, tentatively planned for 2017.

The organisers wish to thank the following for their help in creating the ASVspoof 2015 database: Daisuke Saito (University of Tokyo), Tomoki Toda (Nara Institute of Science and Technology), Ali Khodabakhsh (Ozyegin University), Cenk Demiroglu (Ozyegin University) and Zhen-Hua Ling (University of Science and Technology of China). They also wish to thank Cemal Hanilci, Md Sahidullah and Aleksandr Sizov (University of Eastern Finland) for their contribution to the design and validation of the ASVspoof 2015 protocols.

The work was partially supported by EPSRC Programme Grant EP/I031022/1 (Natural Speech Technology), Academy of Finland (project no. 253120 and 283256) and by the OCTAVE project which received funding from the European Union's Horizon 2020 research and innovation programme under grant agreement No. 647850. 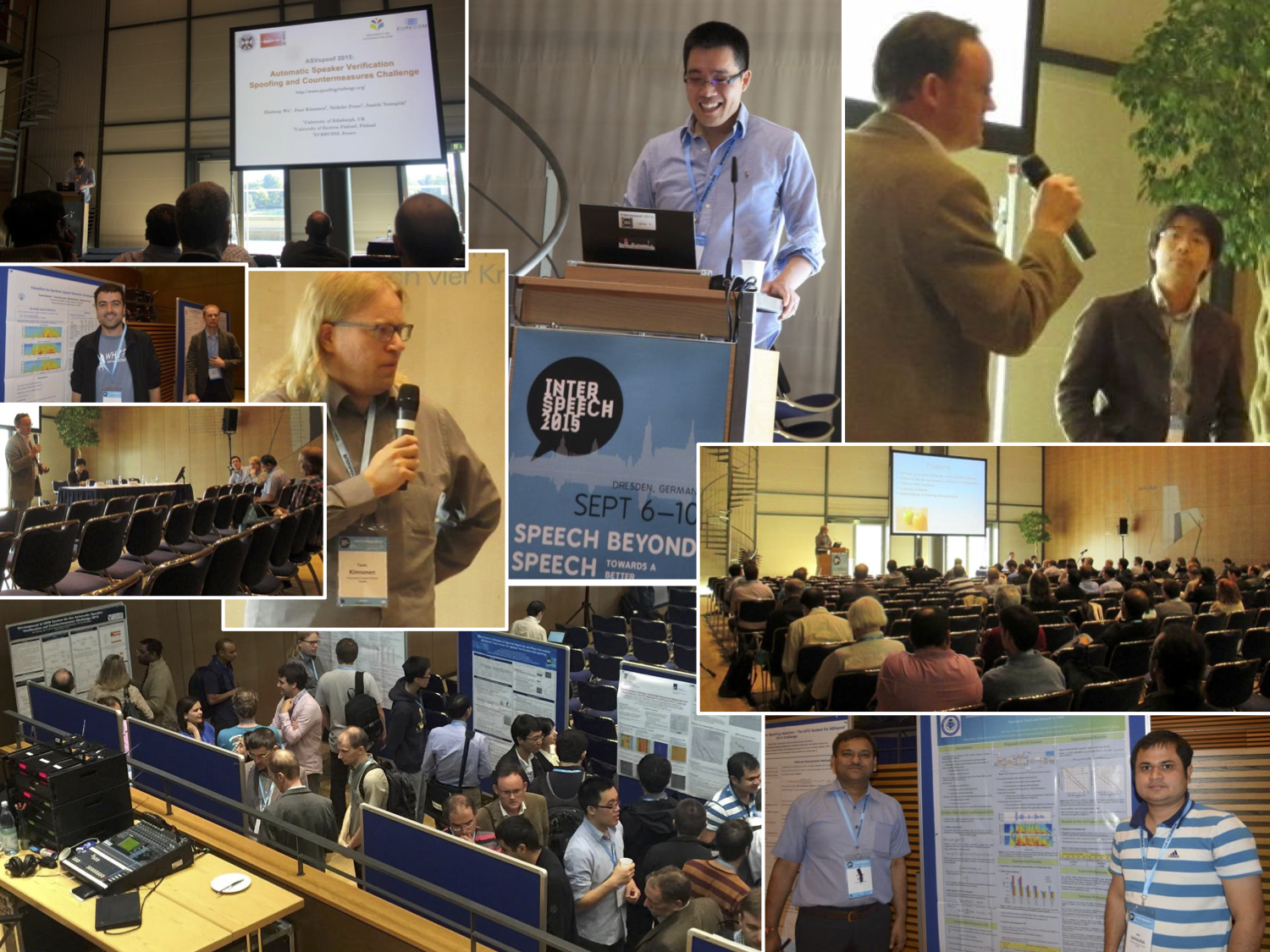