Silicon Photonics-Special Issue of Proceedings of the IEEE

Home » Silicon Photonics-Special Issue of Proceedings of the IEEE

Silicon Photonics-Special Issue of Proceedings of the IEEE 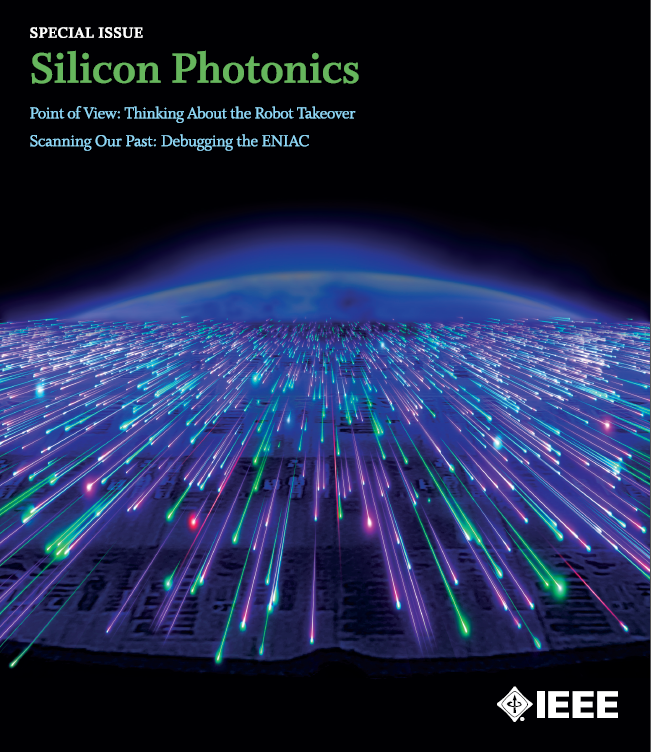 This month's special issue of Proceedings of the IEEE provides a state-of-the-art overview of the field of silicon photonics, which is making a significant impact on fiber-optic communications and spreading to new areas such as sensors and deep learning.

Silicon, well established as an electronics platform, was first seriously explored as an optical waveguide platform in 1987 by Soref and Bennett. Light at fiber-optic communication wavelengths can pass through crystalline silicon with very high transmission. Silicon waveguides can be made by etching into the thin crystalline silicon layer on a silicon-on-insulator wafer. Because of the high refractive index of silicon compared to the surrounding oxide, these waveguides can bend with radii less than five micrometers and make compact splitters/combiners, filters, and polarization elements. High-speed optical modulators can be made by rapidly changing free electron and hole densities in the silicon in the optical path, and photodetectors can be made by epitaxially growing germanium on the silicon, both using electrically connected p-n junctions. The only element missing to complete an optical integration platform is an integrated light source, rendered very difficult because of the indirect bandgap of silicon and germanium. While to date, no practical electrically pumped light emitter has been deployed based on silicon itself, multiple hybrid and heterogeneous solutions have been reported.

Initially, silicon photonics was a solution looking for a problem. III-V materials, such as InP and GaAs, were usually a better solution, offering integrated lasers and more efficient modulators. This changed as the continuing demand for fiber-optic transmission capacity resulted in higher speeds and advanced modulation formats, such as pulse amplitude modulation and quadrature phaseshift keying. These formats require complex, linear, and high-speed transmitters and receivers. The leveraging of existing high-yield manufacturing and dense packaging of silicon electronics to silicon optics finally made economic sense.

Today, 30 years later, silicon photonic-integrated circuits are making a dramatic impact on fiber-optic communications. They are widely deployed, from transoceanic to rack-to-rack links. Silicon photonics has significantly changed the cost structure and supply chain of fiber-optic transceivers. There have been more than 1 000 000 publications on silicon photonics. Silicon photonics is finding its way into other areas, as well, such as sensors, including optical coherence tomography and LiDAR, and deep learning computation. With the growth of the market size, the supply chain is becoming more mature and more complete, with a growing number of commercial actors for prototyping, manufacturing, design automation, testing, and packaging.

In conclusion, silicon photonics is currently significantly impacting the fiber-optic transceiver industry, allowing the relentless trend of smaller footprint and lower costper-transmitted-bit to continue. Its weakness of not having a native laser is overcome by its high-yield processes, low-cost wafers, and ability to copackage with electronics. It is no longer just replacing existing optical transceiver technologies but enabling new applications of optics. It is also spreading to other areas, including sensors and deep learning. As these higher volume applications become more prevalent, silicon photonics progress will likely continue, as the higher volumes encourage silicon foundries to devote more resources to its development.