Register for the webinar to acquire Zoom link!

Over the past fifteen years, “cognition” has emerged as an enabling technology for incorporating learning and adaptivity on both transmit and receive to optimize or make more robust the radar performance in dynamic environments.The term ‘cognitive radar’ was introduced for the first time by Dr. Simon Haykin in 2006, but the foundations of the cognitive systems date back several decades to research on knowledge-aided signal processing, and adaptive radar design.The core of cognitive radar systems is the ‘perception-action cycle’, that is the feedback mechanism within the transceiver architecture that allows the radar system to learn information about a target and its environment and adapt its transmissions so as to optimize one or more missions,according to a desired goal. Such radar systems are sometimes called “fully-adaptive”, to highlight the main novelty of these new systems compared to the classical “adaptive” ones. The adaptivity is not anymore only on receive but also on transmit. But a truly cognitive radar should not be only able to adapt on the fly its transmission waveforms and parameters based on internal fixed rules and on what learned about the environment, but it should also be able to optimize these rules learning with time from its mistakes, as a biological system does (see for instance bath and dolphin sonar system). And this is still a big challenge for radar experts.

This talk will provide an overview of the main concept, and methods for modeling cognitive processes in a radar system. Some challenges to advancing the current state-of-the art will be discussed, and insights into future directions of research will be provided. 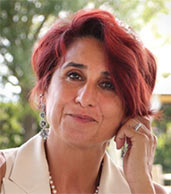 Maria Sabrina Greco graduated in Electronic Engineering in 1993 and received the Ph.D. degree in Telecommunication Engineering in 1998, from University of Pisa, Italy. From December 1997 to May 1998 she joined the Georgia Tech Research Institute, Atlanta, USA as a visiting research scholar where she carried on research activity in the field of radar detection in non-Gaussian background.

In 1993 she joined the Dept. of Information Engineering of the University of Pisa, where she is Full Professor since 2017. She’s IEEE fellow since Jan. 2011. She was co-recipient of the 2001 and 2012 IEEE Aerospace and Electronic Systems Society’s Barry Carlton Awards for Best Paper published on the T-AES, co-recipient of 2019 EURASIP JASP Best Paper Award, co-recipient of the 2019 H Mimno Award for the best paper published on the AE Systems Magazine, recipient of the 2008 Fred Nathanson Young Engineer of the Year award for contributions to signal processing, estimation, and detection theory and of IEEE AESS Board of Governors Exceptional Service Award for “Exemplary Service and Dedication and Professionalism, as EiC of the IEEE AES Magazine”.
In May-June 2015 and in January-February 2018 she visited as invited Professor the Université Paris-Sud, CentraleSupélec, Paris, France.

She has been general-chair, technical program chair and organizing committee member of many international conferences over the last 10 years. She has been also lead-guest editor of many journal special issues on Radar Signal Processing.

She’s Editor in Chief of the EURASIP Journal of Advances in Signal Processing (JASP) and Associate Editor of IET Proceedings – Sonar, Radar and Navigation. She’s has been member of the IEEE SPS BoG (2015-17), Chair of the IEEE AESS Radar Panel (2015-16), SPS Distinguished Lecturer for the years 2014-2015, AESS Distinguished Lecturer for the years 2015-2020, and AESS VP Publications (2018-2020). She’s now IEEE SPS Director-at-Large for Region 8 (2021-22) and President-Elect of AESS (2022-23). She’s also member of EURASIP Board of Directors and Vice-Chair of the SPS SAM Technical Committee.

Her general interests are in the areas of statistical signal processing, estimation and detection theory. In particular, her research interests include clutter models, coherent and incoherent detection in non-Gaussian clutter, CFAR techniques, bistatic/mustistatic active and passive radars, cognitive radars and integrated sensing and communications. She co-authored many book chapters and more than 220 journal and conference papers.