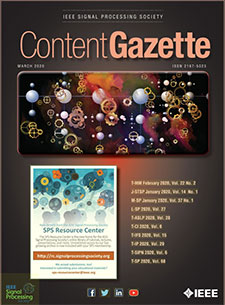 The IEEE SPS Distinguished Lecturer Program provides the means for Chapters to have access to well-known educators and authors in the fields of signal processing to lecture at Chapter meetings. While many IEEE Societies have similar programs, the SPS provides a substantial amount of financial support for the Chapters to take advantage of this service. Chapters interested in arranging lectures by the Distinguished Lecturers can obtain information from the Society’s web page or by sending an e-mail message to <sp.info AT ieee.org>.

Sergio Barbarossa (F) graduated in Electrical Engineering and received his PhD from the University of Rome 'La Sapienza' in 1984 and 1989, respectively. He started working as a radar system engineer in Selenia (1984).  He was a Research Engineer at the Environmental Research Institute of Michigan (ERIM), Ann Arbor, MI (USA) (November 1987 to August 1988); an Adjunct Professor at the University of Perugia (1988-1991); in 1991, joined the University of Rome 'La Sapienza', where he is now a Full Professor.  He has held positions as visiting scientist and visiting professor at the University of Virginia (1995, 1997), the University of Minnesota (1999), and the Polytechnic University of Catalunya (2002, 2008). Dr. Barbarossa received the IEEE Signal Processing Society Best Paper Award (2000) and the European Signal Processing (EURASIP) Technical Achievements Award (2010) “for his contribution to synthetic aperture radar, sensor networks and communication networks”. He was elected a Fellow of IEEE in 2012 “for his contributions to signal processing, sensor networks and wireless communications”. Dr. Barbarossa has been the Scientific Coordinator of several European projects, focusing on MIMO technologies, wireless sensor networks, radar remote sensing, femtocell networks and wireless cloud computing. His current research interests lie in the area of signal processing for self-organizing networks, bio-inspired signal processing, small cell networks, graph theory, game theory and distributed optimization algorithms.

Mauro Barni (F) graduated in Electronic Engineering at the University of Florence in 1991. He received the Ph.D. in Informatics and Telecommunications from the same University in October 1995. He has carried out his research activity for almost 20 years first at the Department of Electronics and Telecommunication, University of Florence, then at the Department of Information Engineering, University of Siena, where he works as Associate Professor. During the last decade, his activity has focused on digital image processing and information security, with particular reference to the application of image processing techniques to copyright protection and authentication of multimedia (digital watermarking and multimedia forensics). Lately, he has been studying the possibility of processing signals that have been previously encrypted without decrypting them (signal processing in the encrypted domain – s.p.e.d.). Prof. Barni is author/co-author of about 250 papers published in international journals and conference proceedings, and holds four patents in the field of digital watermarking and printed documents authentication. He is co-author of the book “Watermarking Systems Engineering: Enabling Digital Assets Security and Other Applications”, published by Dekker Inc. Published in February 2004. He is editor of the book “Document and Image Compression” published by CRC-Press in 2006.

Robert W. Heath Jr. (F) received the B.S. and M.S. degrees from the University of Virginia, Charlottesville, VA, in 1996 and 1997 respectively, and the Ph.D. from Stanford University, Stanford, CA, in 2002, all in electrical engineering.  He was a Senior Member of the Technical Staff then a Senior Consultant at Iospan Wireless Inc, San Jose, CA, from 1998 to 2001.   Since January 2002, he has been with the Department of Electrical and Computer Engineering at The University of Texas at Austin where he is a Professor and Director of the Wireless Networking and Communications Group.  He is also President and CEO of MIMO Wireless Inc. and Chief Innovation Officer at Kuma Signals LLC. Dr. Heath was a co-author of best student paper awards at IEEE VTC 2006, WPMC 2006, IEEE GLOBECOM 2006, IEEE VTC 2007, and IEEE RWS 2009; co-recipient of the Grand Prize in the 2008 WinTech WinCool Demo Contest; co-recipient of the 2010 EURASIP Journal on Wireless Communications and Networking Best Paper Award; 2003 Frontiers in Education New Faculty Fellow; recipient of the David and Doris Lybarger Endowed Faculty Fellowship in Engineering.

Mari Ostendorf (F) received the B.S., M.S. and Ph.D. degrees in 1980, 1981, and 1985, respectively, all in electrical engineering from Stanford University, Stanford, CA.  In 1985, she joined the Speech Signal Processing Group at BBN Laboratories, where she worked on low-rate coding and acoustic modeling for speech recognition.  She joined the Electrical and Computer Engineering Department at Boston University in 1987 and since 1999, she has been in the Electrical Engineering Department at the University of Washington, where she is an Endowed Professor of System Design Methodologies.  She has been a visiting researcher at ATR in Japan and at the University of Karlsruhe in Germany.  From 2010-2012, she served as the Associate Dean for Research and Graduate Studies in the College of Engineering. In 2012-2013, she will be serving as a Scottish Informatics and Computer Science Alliance Distinguished Visiting Fellow in Edinburgh and an Australia-America Fulbright Scholar at Macquarie University. She teaches both undergraduate and graduate courses on signal processing, and has supervised more than 30 PhD students.  Her research interests are in dynamic statistical models for spoken language processing, resulting in over 200 publications. Dr. Ostendorf is an IEEE Fellow and a Fellow of the International Speech Communication Association (ISCA). She was awarded the IEEE Hewlett-Packard/Harriett B. Rigas Award for contributions to electrical engineering education in 2010 and received an SPS Best Paper Award in 1999.